The start to this Sunday was fantastic. Plenty of sunshine, along with a light and variable wind. Skies around midday started to cloud over across the area. While it is humid, temperatures are hovering currently in the lower 80s here in the Findlay area.

Cloud cover continues to be widespread across the area as we now have moved into the early evening hours. 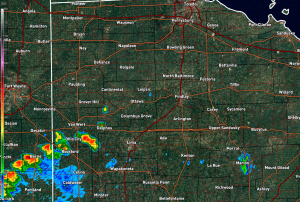 Weather radar at early evening showing scattered showers, and some thunder, to the south and west of Findlay and Hancock County. Movement currently is to the east-northeast.

FORECAST: Here is the forecast for Findlay, and all of Hancock County…

Posted on August 9, 2015, in Uncategorized. Bookmark the permalink. Leave a comment.